Twelve years ago I sent a few feature requests to the Evernote team via their forums. I asked for Markdown, standard text formatting, and code block support. They said it would be considered.

4 years later I had an opportunity to speak with Phil Libin, the CEO of Evernote at the time. I emphasized (again) those features would vastly improve the usability of the product.

I had been a power user for years when Evernote was in its prime. With thousands of notes, I poured everything in my mind into its notebooks. But even back then it was lacking in features that held it back from being perfect.

Like many, I eventually stopped using Evernote and was left to try dozens of other solutions. But this gap in the market created an opportunity for a host of small note-taking apps, including Alternote, Bear, and most notably Notion.

After trying them all, I started using Notion in early 2018 and I haven't looked back.

Notion.so is a powerful note-taking and digital workspace app which has completely revolutionized the way I write and organize notes, to-do lists, and more. I've never seen a product provide so many tools and let you effortlessly combine them so that you can write and note-take the way you want.

Here's an incomplete list of things I write and manage in Notion:

With Notion having recently raised another funding round and growing like wildfire in popularity, I figured this was a good time to write about what makes one of my favorite products great.

What makes Notion great (a shortlist)

Notion supports Markdown, which makes note-taking a breeze but also makes it incredibly useful for writing for the web.

Markdown is a text format standard so you can easily change text size, bold and italicize, add images, and more.

One benefit of Markdown is copied items from Notion contain the Markdown-formatted text. When pasted into another Notion page (or other writing tools that support Markdown), it will automatically format the text as it looked originally.

Another benefit to Markdown is that it's easy to use and learn, and is widely implemented by most blogging platforms. Notion can even export documents to WordPress, Ghost, etc. for easy publishing without losing your formatting.

Gone are the days of re-bolding headers, losing your italics, or re-entering links!

For engineers, communicating with code is crucial. Not only does Notion support code blocks, but those blocks have syntax highlighting for many common programming languages.

You can embed pretty much anything and Notion will make it look great. This makes referencing different files and URLs simple and beautiful. Some URLs like YouTube even embed an interactive window so you can play videos or interact with the content without leaving Notion.

As an engineer, I've used the CodePen and GitHub Gist embeds to make my notes more dynamic and easier to reference than opening the URLs themselves. 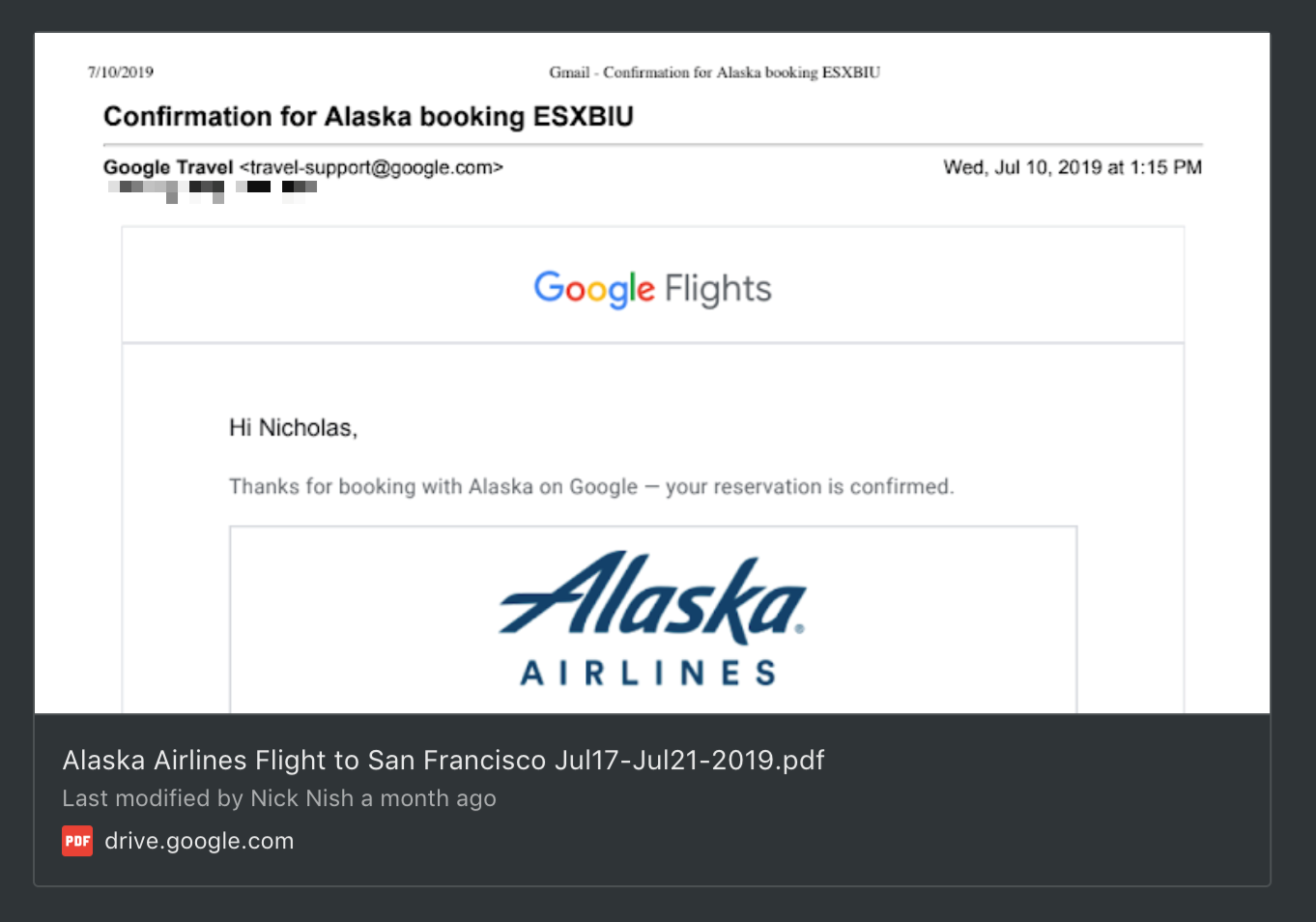 Templates allow you to create a pattern from a page or block, which you can create a copy of instantly. From the Notion docs…

You can easily replicate content combinations you use frequently — essentially creating your own template. For example, let's say you want to fill out the same form every day asking you what you're grateful for without re-creating it constantly. Or you want to generate the same to-do list at the start of every day. Our Template Button is perfect for that! 🖋

Templates are incredibly useful, but they can be confusing to use. My next post will explain in further detail how to use this feature.

EDIT: Learn to use templates by creating a weekly agenda

Who knew note-taking apps were missing databases all this time?

Before you start thinking that Notion is only for "engineers" or scientists, I should be clear: Databases in Notion are greatly simplified. These databases are simply organized lists of pages that you can properties (e.g. tags), images, embeds, and other blocks to. They can be viewed and organized in different formats that fit your usage.

Behold the ability to create spreadsheets, kanban boards, lists, calendars, and galleries in one place! 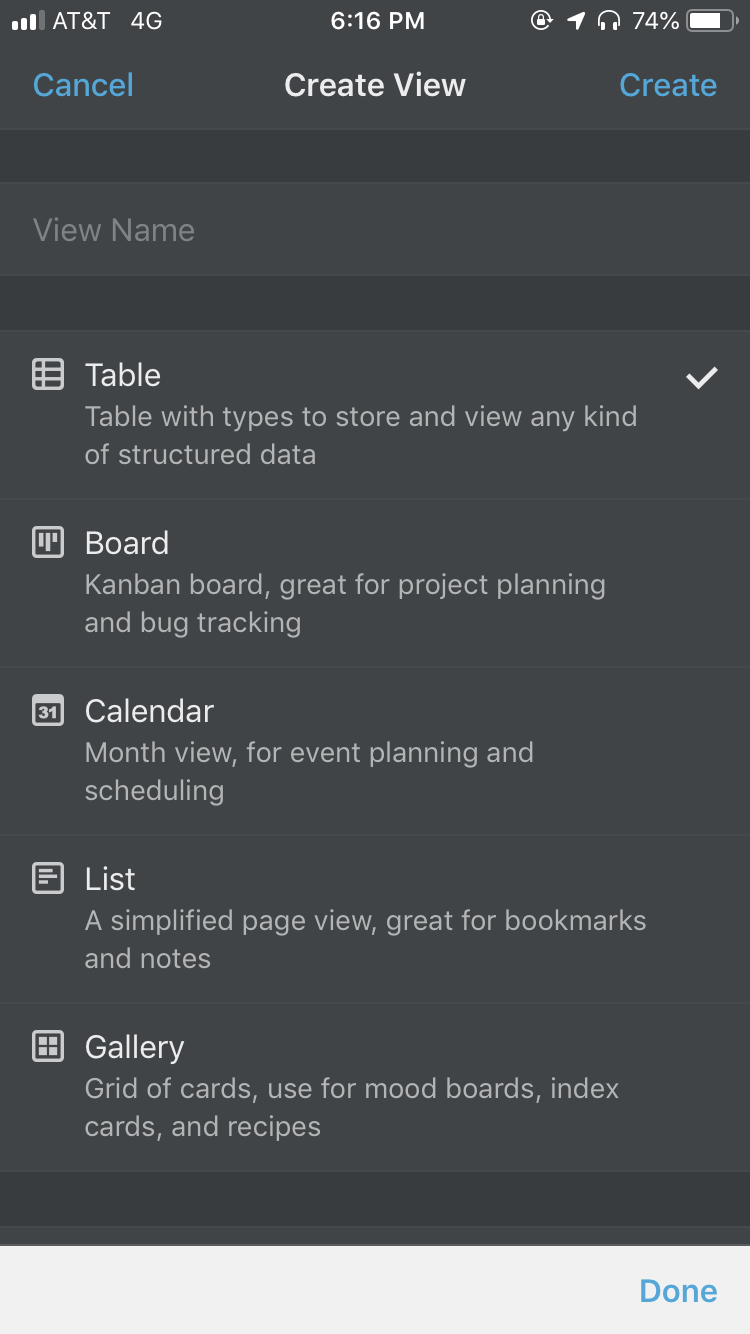 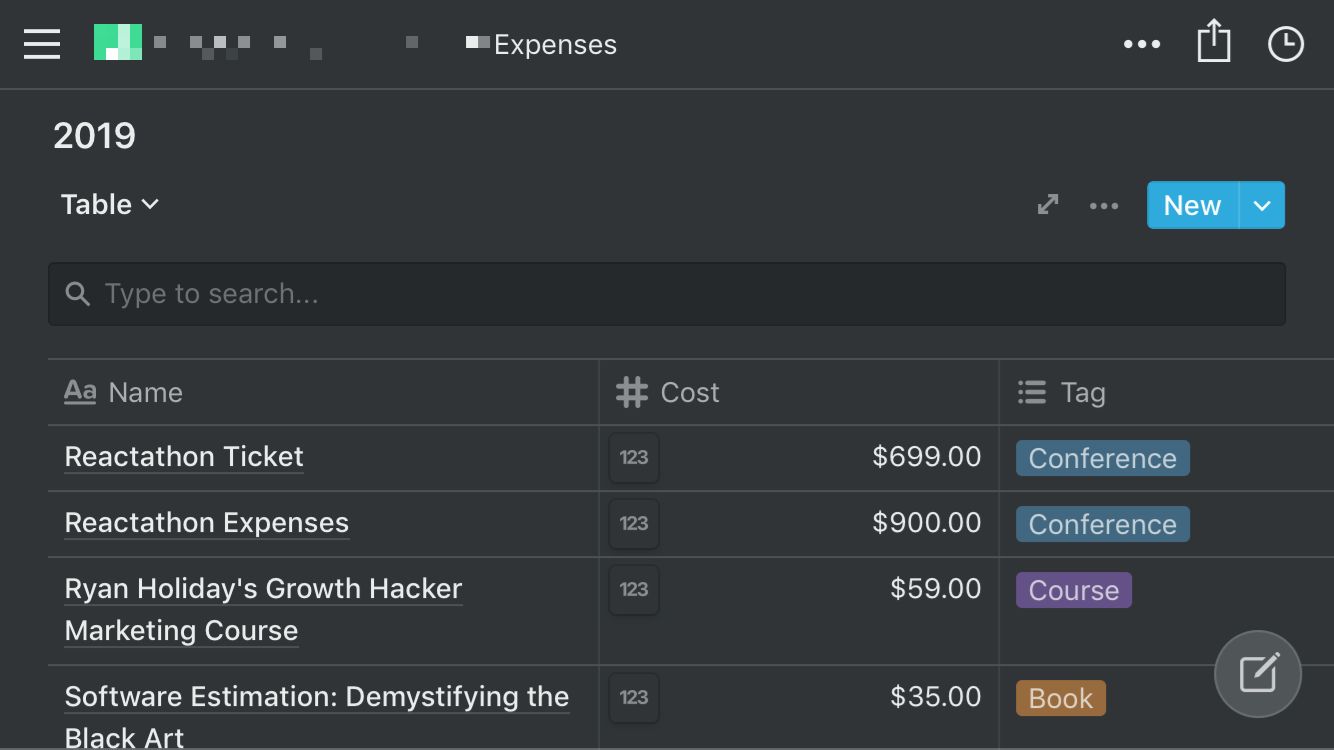 In combination with other Notion blocks, databases are incredibly powerful for managing data.

Here are some ideas:

You might start to see how databases, embeds, and text can be used together to create a powerful digital workspace.

Like other similar note-taking products, Notion’s approach to organization is simple-to-understand. However, it’s a lot more scaleable.

In the screenshot below, you’ll see I’ve separated notes into top-level pages named after categories. I’ve called these top-level pages “notebooks”, but these are simply pages that contain more notes. As a result, my sidebar is clean and easy to read. 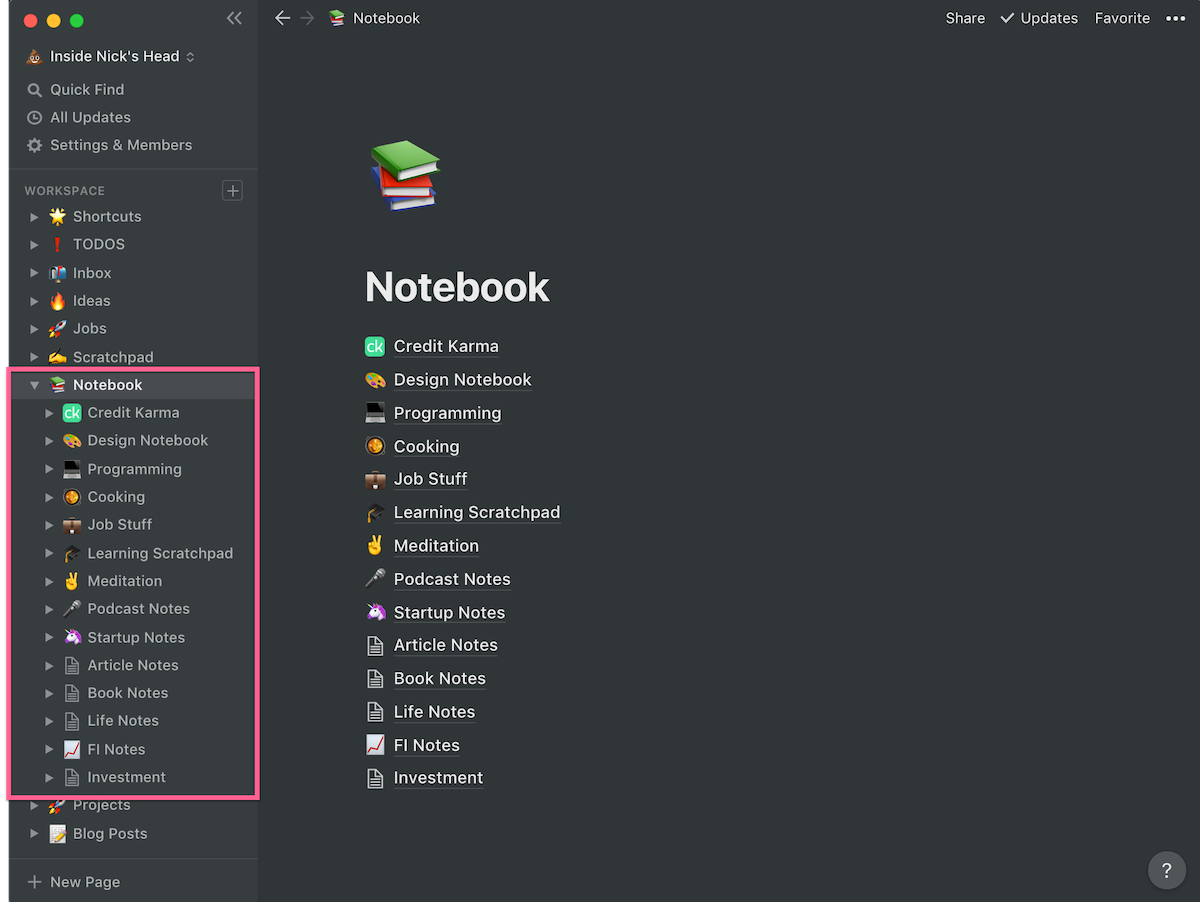 With the addition of a powerful search function, Notion's approach to note organization is a huge improvement over the flat notebook structure or tags approach seen in other competitor products.

This list wouldn't be complete if I didn't mention that Notion has a stellar user experience.

From the moment that you sign up, you're given a variety of different templates to try and experiment with. After the easy onboarding, you'll always have access to Notion's fantastic templates so you never have to start from scratch. I often use these templates as starting points for different types of notebooks and notes.

In addition, there's a host of great shortcuts, easy access to support, and clear settings and billing that shows that the Notion team has thought through the tiniest details.

Notion publicly releases their changelog for every new update, where they announce new and upcoming features.

It seems that every two weeks the Notion team announces new features, bugfixes, and improvements. This is lightning fast compared to other products and should not be glossed over. Continuous product improvements from your usage and feedback mean that Notion gets better over time. It means that the product continues to exist and serve us in perpetuity.

There have been a few occasions when I've encountered a bug, that was fixed in the following update. Especially being an engineer, this turnaround time is always like magic to me.

Every time Notion releases a new feature, I read about it and incorporate it into my notes and workflow. It's rare that I'm so glued to a product's roadmap, but I'm legitimately excited when a new feature drops. 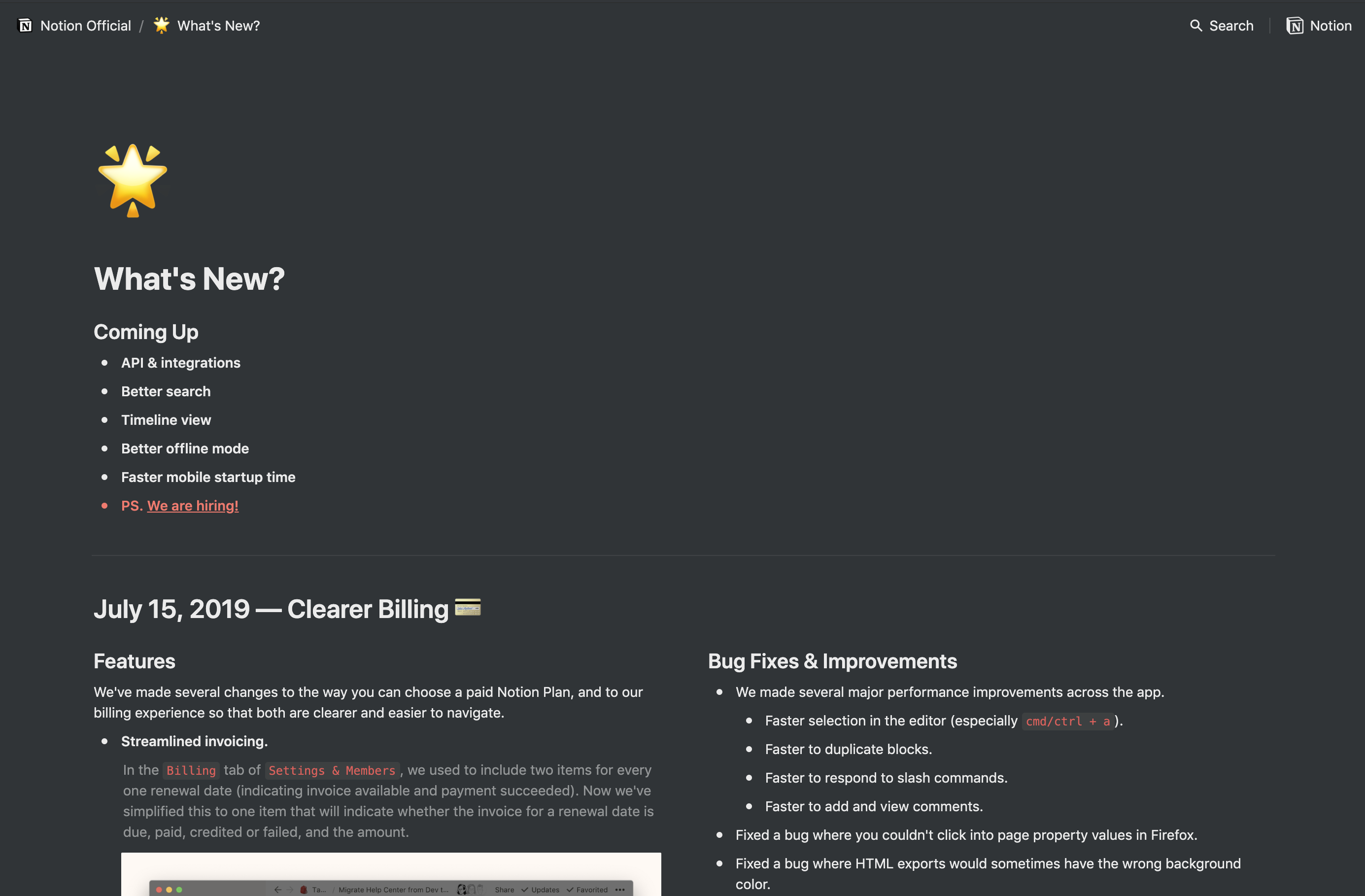 It's a massive headache to deal with losing your notes, which interrupts your workflow and forces you to learn a new product. This is especially true if you run your business using a certain tool.

Notion's continual improvements, company growth, transparent product roadmap, and new funding indicate that the company has longevity. These are the best signals that Notion is not only going to stick around, but will also get better over time.

Write the way you think

At its heart, what makes Notion an incredible product are its ergonomics, flexibility, extensibility, and rapid product improvements. Notion recognizes the missing features and usability failures of its predecessors and rethinks what writing and digital workspaces can be.

For the first time, you are empowered to write and manage notes the way you want. At the end of the day, a writing product needs to have all the tools to express yourself. Then, it should get out of your way.

Notion does this with ease.

To learn more about Notion, check out their homepage or go to their Support page where they have tons of resources to maximize Notion's potential.

Sign up for Notion and get a free $10 credit (full disclosure: I get a $5 credit when you sign up).

Next up: My next post is about how to use Notion Templates to set up a daily agenda like I use

Join a community of makers and creatives who are learning how to leverage technology to create new products. Or, you know, just keep up with the latest blog posts.